Q: What's the difference between a cartoon & a caricature?

Q: What defines a caricature vs. a cartoon, or is it one of those things that all caricatures are cartoons, but not vice versa? What actually makes a caricature!?

A: Many people lump them together including many artists. They are very similar and interchangeable in some cases but there are distinct differences between the two. A cartoon is a simplified illustration that has a quick, whimsical style to it. Anything can be drawn as a cartoon whether it’s a person, animal or scenery. A caricature is specifically an illustration of a person drawn in an exaggerated style to play up their distinctive features. Some may argue that an animal or even a car or a house can be drawn as a caricature. But unless you have an original point of reference or know the animal, house or car in question, it’s hard to call it a caricature. When you see a famous face as a caricature and recognize it even without a photo to compare it with, that is a successful caricature. The term, caricature, itself has grown to embody the definition of exaggerated and two-dimensional. “Jack Nicholson now acts like a caricature of himself” is an example of how the word has morphed to mean anything that is over-the-top exaggerated. Although many caricatures are drawn in a cartoon style, many can be very detailed or painted in a serious fashion. Below are two samples of caricatures of me which demonstrate a very cartoon style drawing vs. a more rendered approach. 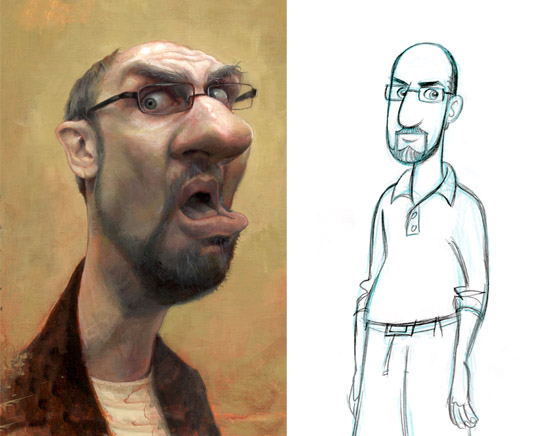 The detailed painting on the left of me by illustrator, Jason Seiler, is a good example of a caricature that is not a cartoon style while the sketch of me on the right, drawn by character designer, Steve Silver, can easily be considered a cartoon style drawing. But in both cases they are considered to be caricatures.
Posted in Caricatures, Q&A